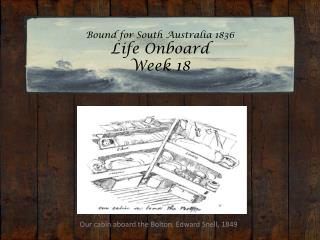 Bound for South Australia 1836 Life Onboard Week 18. Our cabin aboard the Bolton. Edward Snell, 1849. Overview. Regionalisms, Slang and Strine: Australian Slang by Region. - Research by mark mccrindle and mccrindle research on the

Origin and Evolution of Life on Earth (Week 5) - . searching for the origin functional beginnings of life focus on

Week 5 E.T.’s, Life, and Research - . wrapping it up!. life on our world. life on other worlds the nature of life