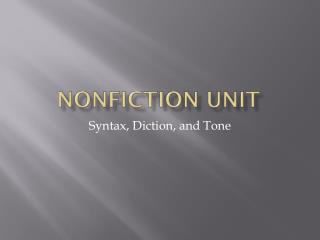 Nonfiction Unit. Syntax, Diction, and Tone. Phrase vs. Clause. Phrase—subject or verb, not both Clause—both a subject and a verb. Put P for phrase and C for clause. Two Types of Clauses. Independent: a sentence; can stand alone

Nonfiction: Memoirs - . by: tanya, nam hoon , wimutiporn , witchakorn 8e. what is nonfiction?. prose writing that is

Unit 3: Nonfiction - . biography autobiography memoir. truth is not only stranger than fiction, it is more telling. to

Nonfiction - . english 9 a. nonfiction element - autobiographies and biographies. a biography is the written story of a

INTRODUCTION TO NONFICTION - . a multi-cultural journey. what is nonfiction? . the subjects of nonfiction are real

Nonfiction - . what is nonfiction?. non-fiction is prose writing that presents and explains ideas or that tells about

Fiction and Nonfiction - . fiction a made up story can tell about things that could happen is read for fun characters

Unit 2: Nonfiction - . informational text. truth is not only stranger than fiction, it is more telling. to know that a

Introduction to Nonfiction Reading Unit - . essential questions. when our curiosity is raised about a topic how do we 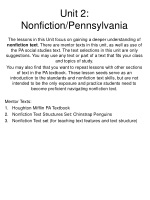 Nonfiction Unit - . informational text, memoirs, and persuasive writing up to half or more of your eoc will be