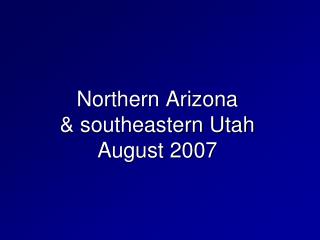 Northern Arizona & southeastern Utah August 2007. Participants: David Sissom, Tom Anton, Gary Casper The goal of the trip was to accumulate additional samples of vaejovids for DNA sequencing and to flesh out geographical distributions.

Supporting AT Use in Arizona Schools - . aztap is a program of the institute for human development at northern arizona

DISCLAIMER - . the content, logos, graphics, and images in this presentation are the sole property of utah career and