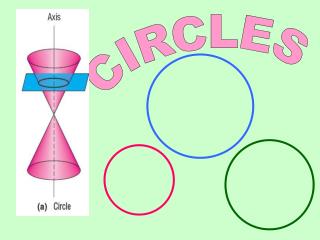 CIRCLES - . the standard form of the equation of a circle with its center at the origin is . r is the radius of the

Circles - . 10-1 circles. c. i. definitions circle the set of all points in a plane that are at a given distance from a

CIRCLES - . spi 3108.3.1 use algebra and coordinate geometry to analyze and solve problems about geometric figures

Circles - . properties of circles perimeter and area. what is a circle?. a circle is defined as a plane curve formed by

Circles - . vocabulary and properties. circle. a set of all points in a plane at a given distance (radius) from a given

Circles - Mathematics. circles. grade. introduction. objective : to identify some concepts of the circle such as

Circles - . chapter 9. tangent lines (9-1). a tangent to a circle is a line in the plane of the circle that intersects

Circles - . how do you find the circumference, radius, and diameter of a circle?. what is a circle?. a circle is a plane

Circles - Spi 6.4.4 i can identify parts of a circle. i can find the circumference and area of a circle. circles. parts