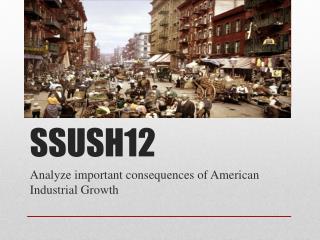 SSUSH12. Analyze important consequences of American Industrial Growth. SSUSH12a: Describe Ellis Island, the change in immigrants’ origins to southern and eastern Europe and the impact of this change on urban America. When cities increase in size, its called Urban Growth Angel Island and Chinese Immigration - . 11.2.2 describe the changing landscape, including the growth of cities linked by

CHAPTER 14 IMMIGRATION AND URBANIZATION - . how did american urban life change between 1875 and 1914?. standards. ssush

Effects of Westward Expansion - . objectives. explain the effects of the mexican-american war on the united states. trace

Site is the actual location of a city. - Site and situation are important geographic concepts when studying the growth of

SSUSH 11 - The student will describe the economic, social, and geographic impact of the growth of big business and

SSUSH 20 - Cold war and the united states. ssush 20. ssush 20 analyze the domestic and international impact of the cold

SSUSH 9 - . ssush9 the student will identify key events, issues, and individuals relating to the causes, course, and

Standard – SSUSH 6 - . the student will analyze the impact of territorial expansion and population growth and the

The New Immigrants - . changes in american life 1880-1914 chapter 21, section 2. essential questions. why was there such