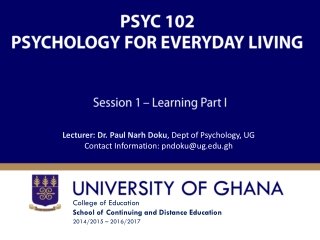 Series: Faith for Everyday Living - . what it means to have faith hebrews 11. faith is…. 1. … believing when i

PSYC 111: Intro Psychology - . sleep and dreaming. what is sleep?. stages of sleep. developmental changes. why do we

PSYC 499 Psychology Internship - . psyc 499 psychology internship. psyc 499 is required to give you the experience of

General Psychology PSYC 200 - . intelligence. discussion questions. do we place too much emphasis on intelligence in