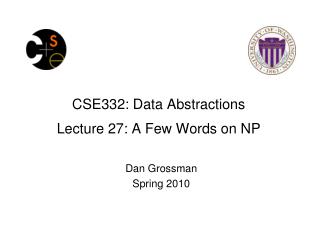 CSE332: Data Abstractions Lecture 27 : A Few Words on NP. Dan Grossman Spring 2010. This does not belong in CSE332. This lecture mentions some highlights of NP , the P vs. NP question, and NP -completeness It should not be part of CSE332:

Spider Locks Manufacturers At Aligarh - If you are planning to decorate your home with the right door handle, you need

01/10/11 Bar Graphs, Histograms, and Misleading Graphs - . warm up 1. how many students say oranges are their favorite?

The Case of the Three Bears’ Breakfast - . lesson 10 day 3. question of the day. one reason to share knowledge with

Lecture One - The college of int’l studies yangzhou university. lecture one. 解读英语基础教育：理论与实践