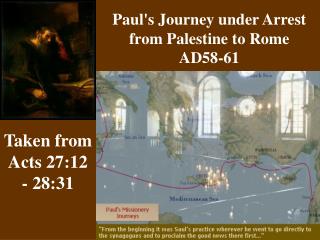 Paul's Journey under Arrest from Palestine to Rome AD58-61

Paul's Journey under Arrest from Palestine to Rome AD58-61

Do Now: Day 1 - . we will begin studying the ancient empire of rome. what modern day country is rome located in? define

Our Journey - . lisa michaelis heartland regional medical center administrator. overview. why we do what we do our