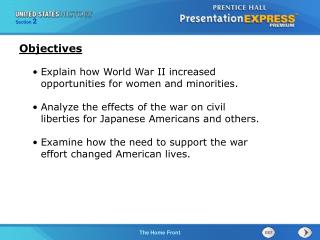 Objectives. Explain how World War II increased opportunities for women and minorities. Analyze the effects of the war on civil liberties for Japanese Americans and others. Examine how the need to support the war effort changed American lives. . Terms and People.

Honoring the veterans - Around the globe, veterans are perceived today for their administration. crosswise over united

Aggression Leads to War: The Onset of World War II in Europe - . guided reading activity answer guide. the devastation of

Title: The impact of Communism throughout the post-WWII era. TODAY ’S FOCUS: - Aim: what impact did communism have on

Chapter 6 Issues in Policing: Professional, Social, and Legal - . learning objectives. discuss some of the problems of