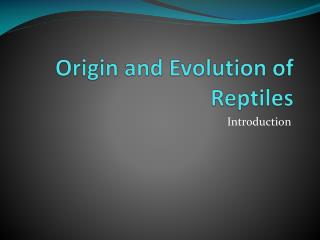 Origin and Evolution of Reptiles Origin and Evolution of Reptiles. Introduction. Introduction. From studies of fossils and comparative anatomy, zoologists infer that reptiles arose from amphibians. The oldest known fossils of reptiles are about 350 million-years-old.

Origin and Evolution of Reptiles

Chapter 31 Reptiles &amp; Birds - . evolution. dinosaurs are reptiles that walked leg below hip and either had: bird

Evolution - . biology review. charles darwin. known as the father of evolution wrote book on the origin of species sailed

Unit 11: Origin of Life and Evolution - . the origin of earth . the earth is approximately 4.6 billion years old. origin

Unit 11: Origin of Life and Evolution - . the origin of earth . the earth is approximately 4.6 billion years old. origin

Raging Reptiles! - . click here!. can any of you name these three reptiles? objective: today we are going to learn how to

Reptiles - . evolution of  reptiles:. reptiles were 1st vertebrates to make a complete transition to life on land (more

Reptiles - . by andre and austin. reptilians. today we will talk about reptiles ( reptilians.) other people, like Misconceptions About Evolution -University of California at Berkley - . misconception: “evolution is a theory about the