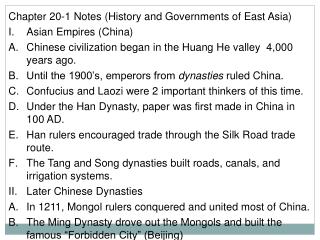 Chapter 20-1 Notes (History and Governments of East Asia) Asian Empires (China) Chinese civilization began in the Huang He valley 4,000 years ago. Until the 1900’s, emperors from dynasties ruled China. Confucius and Laozi were 2 important thinkers of this time.

THE SPREAD OF CIVILIZATION IN EAST ASIA - . japan, korea and vietnam in the post-classical age. geography influences

The Asian Tigers - . economic growth in developing asian countries. growing economies in se asia. prior to 1970 japan was

History and Governments of South Asia - . 1 - harappa and mohenjo daro, located in the indus river valley, may have been

The History of East &amp; SE Asia - . a new dynasty comes to power. the emperor reforms the govt. &amp; makes it

Indian and China Establish Empires - . chapter 7. sswh2 the student will identify the major achievements of chinese and