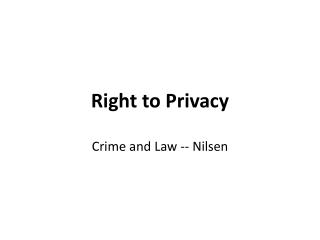 The end of Privacy ?? - . dr.murat kantarcioglu. right to privacy?. “the right to be left alone” explicit right to

It’s not what IT does to Privacy it’s what Privacy does to IT - . robert thibadeau, ph.d. www.internetlab.ri.cmu.edu

Long-Term Future of Health Privacy and Security - . why it matters to you now. w. ed hammond, phd, facmi, faimbe, fhl7,

Civil Liberties - . chapter 15. protection under bill of rights. students do not shed constitutional rights at the door,