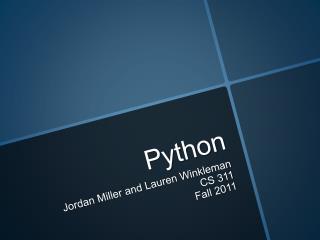 Python. Jordan Miller and Lauren Winkleman CS 311 Fall 2011. Guido Van Rossum implemented/created Python in 1991. He wanted to create a language anyone can use. The point was to make it an easy language to learn. Rossum is known as Python’s Principal Author Python - . what is biopython ?. biopython is a python library of resources for developers of python-base software for

Python - . functional programming. functions are first-class objects. functions can be used as any other datatype, eg:

Python - Stephen jones and glenn johnson. python. python was created in 1991 by guido van rossum. it is a c written

Python Tutorial | What is Python? | Python Programming - This python tutorial will help you learn python and build a

Python - . what is python? . a programming language we can use to communicate with the computer and solve problems we