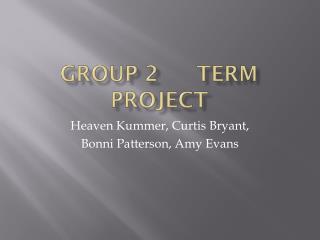 1040 Group Project - . by: andrew, angela, alex, seph and cailey. study design: is a person’s age related to how many

Group 4 Project - . may 2012. is not another ee in science. is a collaborative team exercise. is not a huge amount of

Mid -Term Project III: Skit - . form a group of 2-4 choose any topic that you are interested in at least five lines for

Group 4 Project - . what’s this project about?. goal= ib says, “the group 4 project is a collaborative activity where

Term Project - . service learning. semester project: set up a website for a project of interest to you ideas: service,