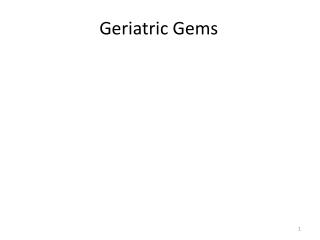 Geriatric Gems - . “sex after ninety is like trying to shoot pool with a rope. even putting my cigar in its holder is a

Gems - . by kamila and fabiana. gems are. a cut and polished precious stone or pearl fine enough for use in jewelry.

Gems - . gemstone: a precious or semi-precious stone. - usually a mineral gem: a cut or polished gemstone. to be a gem a

Ankur Gems - My father started collecting minerals specimens as a part of his hobby in 1991, that is how when foundation

Geriatric Imaging - Geriatrics. branch of medicine dealing with aged and problems of aginggeriatric patients are persons

Geriatric Rehabilitation - . what would be the most appropriate assistive device? 78 y/o f s/p (l) tka w/ severe ra of