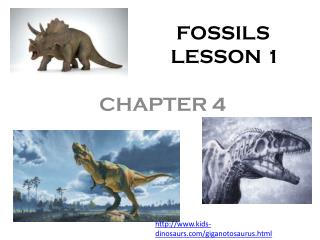 FOSSILS LESSON 1. CHAPTER 4. http://www.kids-dinosaurs.com/giganotosaurus.html. What are Fossils ? Fossils form when living things die and are buried by sediment. The sediment hardens into rock and preserves the shapes of the organism. What happens next?

Fossils and Species Development - . life on earth. there are many theories of how life first appeared on earth, but lack

Fossilization and Fossils - . so what exactly is a fossil?. any evidence of ancient life. body fossil teeth or bones

Lesson 1 Reading Guide - KC - Fossil evidence of evolution. how do fossils form? how do scientists date fossils? how are

What are Fossils? - . fossils are the evidence or remains of once-living plants or animals fossils provide evidence of

lesson 1 - . short vs. long vowel sounds in words. syllable. a syllable is a word or part of a word with 1 vowel sound s

Chapter 9 – 1 FOSSILS - . evidence of ancient life. fossil are the preserved remains or traces of living things. they

Index fossils - . some fossils are typical at a particular time segment. useful in identifying the relative age of the

Interpreting Fossils - Pg. 46 of ian. interpreting fossils. objective:. to show how fossils can be used to provide

Vignette on fossils - . pass fossils through – you can remove tags to look at fossils, but please replace them these

Common Missouri Fossils - . trilobites. trilobites are extinct sea creatures that were one of the first forms of life on

Trace Fossils - . ichnofossils. tracks and trails . these features result from organisms moving across the sediment as