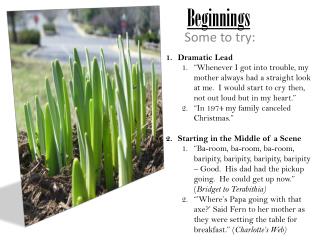 Dramatic Lead “Whenever I got into trouble, my mother always had a straight look at me. I would start to cry then, not out loud but in my heart.” “In 1974 my family canceled Christmas.” Starting in the Middle of a Scene

Radiochemistry - The Integration of Physics and Chemistry - the Beginnings - . - klaproth uranium discovered -

Crochet - . selynah slusser. brief history of crochet. there really is no proven beginnings of crochet believed to be

Plant and Animal Adaptations to Fire - . what is evolution??. all changes that have transformed life on earth from its

GENESIS - . part four book of beginnings god as creator man made in god’s image (“i am”, omniscient, creator, work,