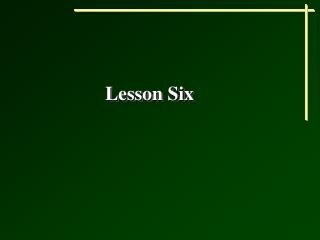 Lesson Six . Pattern Drills. air: v . The large television networks in France has aired a number of stories on Jefferson this week. The whole issue was thoroughly aired at the meeting. One day a week her mother cleaned and aired each room. Lesson Six - . definition and the contents of certificate of

Lesson Six - . disappearing through the skylight ------- by oshborne bennet hardison jr. aims. to know the features of

Lesson Six - . 1.persuade sb to do sth:/. persuade sb into doing sth. i persuaded him to try again. i was persuaded to

Lesson six - . food and drinks. lesson objectives. today we will learn… words for drinks, words for food, to use verbs