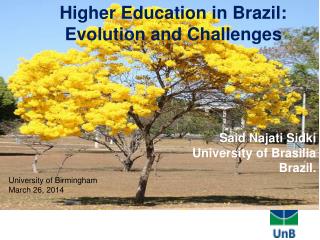 Higher Education in Brazil: Evolution and Challenges. Said Najati Sidki University of Brasilia Brazil. University of Birmingham March 26, 2014. A snap shot of Brazil. Brazil is now the sixth largest economy in the world.

BRAZIL - . by david manning and dominic cabano. pre-world war ii . produced most of the world’s coffee and cocoa, along

History of the Jews in Brazil - . prepaired and researched by jessi yishai bloch. grade 4, teachers mrs friedman and

Transcript analysis and reconstruction Brazil 2001 - . genes. why are there only a few tens of thousands of genes in the

The Brazil Jeopardy Game - . round 1. round 2. chief exports for $100. what export in brazil helps people travel long