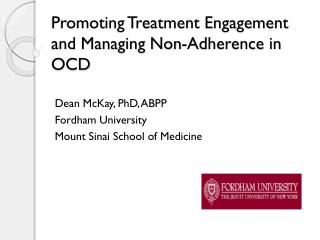 Engagement of GDS - . governed by gramin dak sevak (conduct and engagement) rules-2011. came in to effect from

Medication Adherence: - . to take or not to take?. adherence vs. compliance . adherence : “the degree to which a

Adolescent HIV Care and Treatment - . module 8: supporting adolescents’ retention in and adherence to hiv care and