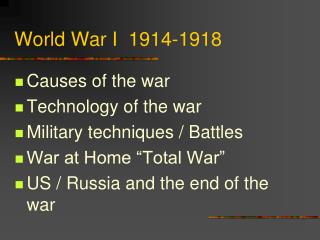 World War I 1914-1918. Causes of the war Technology of the war Military techniques / Battles War at Home “Total War” US / Russia and the end of the war. Traditional European Rules of War. 1. A country must declare war before attacking another country.