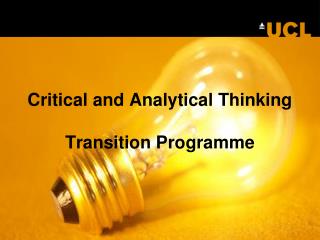 Beyond Question Stems: Critical Thinking in the 21st Century Classroom - I developed and delivered this presentation for

Claims and Critical Thinking - . claims are either true or false. some sentences (even some nondeclarative ones) make

Analytical Standards - . introduction . standards are materials containing a known concentration of an analyte. they