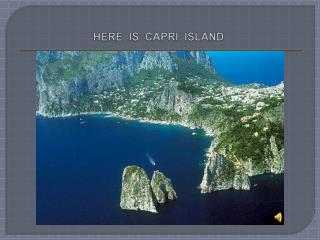 HERE IS CAPRI ISLAND. The Capri case. The island of Capri is the typical example of a “ honeypot ”, a place attracting a great number of tourists for its beauty. The data report peaks of 18.000-20.000 people a day in summer. The Trojan War-a Summary Background to The Odyssey - . the birth of paris. around 1200 b.c. troy was a wealthy,

Volcano Exploration Italy 2014 - . welcome to jcg please come and tick the register and let us know who you are!. who is

Sunday Afternoon on the Island of La Grande Jatte by: Georges Seurat - . osborne elementary school art in motion. from a

HONEYPOT - Clemson university. honeypot. by siddartha eleti. i ntroduction. introduced in 1990/1991 by clifford

The Colosseum , One of the Seven Wonders of the World - Capri, 14-17 june 2011. the enhancement, value and viability of

Roman Rule timeline - . cincinnatus 460 b.c. rome’s first known dictator ruled for 15 or 16 days and then return to his

The Salish - . samantha bannister and tera krone. who are the salish?. salish creation: created by the old man in the sky