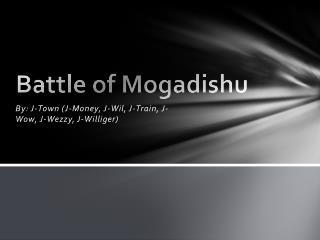 The Battle of Mogadishu October 3-4,1993 - . bradley johnson. background . january 1991 the president of mogadishu is

Mogadishu tourism - Comes to know the way of life and convention. the tourism arranged in the prominent rift valley, the

Battle of the - . books. 2017-2018. what is involved?. students will form groups of three team members cannot change…

Battle of Gattysburg - . fahtieema johnson. introduction. the battle of gettysburg was fought between july 1 to july 3,

Battle of Jamal - . presented by: mariam mohammad. a ’ isha was the wife of the prophet (pbuh) and the