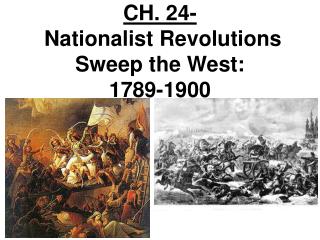 Chinese and mexican Revolutions - Unit 6: accelerating global change and realignments c1900 to the present. chinese and

Conquest of the West 1865-1900 - . how does this image exemplify manifest destiny?. the west provided investors and those

Reconciling Nationalist Loyalties - . does everyone love a parade? why do people enjoy them?. read page 67 respond to the

Challenges to the “Concert” System: The 1820s-1830 Revolutions - . an evaluation of the congress of vienna. the

Looking to the West, 1860-1900 - . great plains, pacific northwest, and the southwest develop. pacific railways acts of