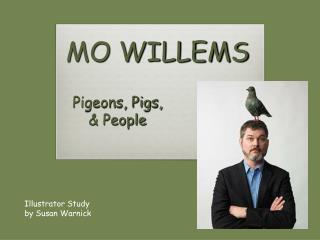 MO WILLEMS. Pigeons, Pigs, & People. Illustrator Study by Susan Warnick. Mo Willems’ Funny Drawings. “ I’ve drawn ever since I was a child, and I lived a lot of my life through making cartoons and telling my own stories.”. Mo Willems. Born: February 11, 1968 Hometown: New Orleans, LA

On the role of Scenario’s for Defence (and Security) Planning - . velingrad, bulgaria 21-25 october 2006. nato science

Kids Need to Read a Lot - . what reading does for the mind…. children need to spend time reading! the amount children

KNUFFLE BUNNY - . by: mo willems tiffanie trevino. not so long, before she could even speak words, trixie went on an

Do you know? - . what does a pigeon, an elephant, a pig, a stuffed bunny and a naked mole rat have in common ?. photos

What is an author? - . what is an illustrator?. can you guess who this author and illustrator is?. hint: look on top of