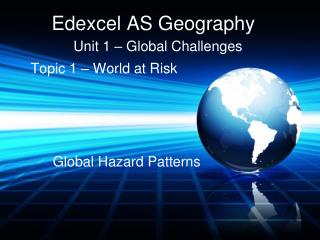 Edexcel AS Geography. Unit 1 – Global Challenges. Topic 1 – World at Risk. Global Hazard Patterns. Hazard Risk in Your Local Area. Looking at disaster hotspots shows that some places are at more risk than others

EDEXCEL IGCSE / CERTIFICATE IN PHYSICS 1-5 The Turning Effect of Forces - . content applying to triple science only is

Human Geography People and Places - . geography and the environment help shape human cultures, but humans also use and