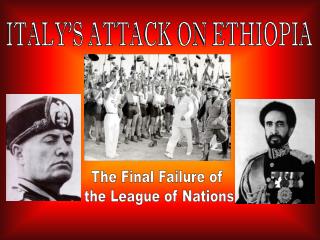 ITALY'S ATTACK ON ETHIOPIA. The Final Failure of the League of Nations. ITALY. ETHIOPIA. VS. "War is to man as maternity is to women". -Mussolini (Leader of Italy). Mussolini. “Let us have a dagger between our teeth, a bomb in our hands, and an infinite scorn in our hearts.”.

Chapter 10 The Coming of War 1931 - 1942 - . section titles dictators and war from isolation to involvement america

Introduction to WWII - . adapted from http://worldhistory.pppst.com/ww2.html. during world war ii, many women took over

Aggressors Invade Nations - . ch. 15.4 as germany, italy, and japan conquer other countries, the rest of the world does

WWII Leaders Rise to Power - . “demoralize the enemy from within by surprise, terror, sabotage, assassination. this is

The Road to WWII - . chinese turmoil. in 1925, chinese president sun yixian died and leadership of china passed to

Battle of Cannae Battle of Zama Consequences of the 2 nd Punic War - . battle of cannae. having recovered from their

The Jews of Ethiopia - Among ethiopia's falash mura jewish