What is Animation? - PowerPoint PPT Presentation 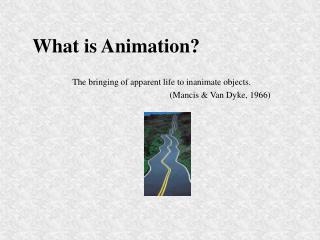 The bringing of apparent life to inanimate objects. (Mancis & Van Dyke, 1966) ‏. What is Animation?. Animation Timeline (the history of animation part one) ‏. 1820 Persistence of Vision.

Animation and Data Visualization in JavaScript - . by kyle scholz for the ajax experience october 24 th , 2006. overview.

Animation - . adapted from a presentation by timothy chan

History and techniques of stop motion animation - . i will going through famous pioneers such as ray harryhausen, stop

Animation - . what is animation?. animation is the rapid display of a sequence of images of 2-d or 3-d artwork or model

2.02A History of Animation - . 2.02 develop computer animations. animation. the rapid display of a sequence of images of

Animation Fundamentals - . by alexander ewing. what is animation. a simulation of movement created by displaying a