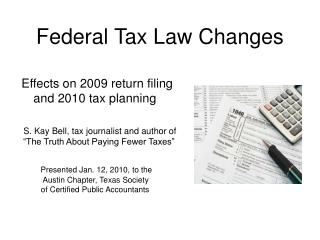 Some Lies and Truths about income taxes - One type of federal tax that americans unwittingly pay is income tax. lie 1: Major Tax Law Changes - . peter j. chudyk, cpa, jd christopher b. anderson, cpa. what we will cover. provisions in the

US Income Tax Issues for - . expatriate canadians americans that have lived in canada relocations to the

Current Legislation Update: How to Navigate Through the Recent Tax Law Changes and Embrace the Future - . joseph v.

Chapter 1 - . an introduction to taxation and understanding the federal tax law. 1. the big picture (slide 1 of 5).