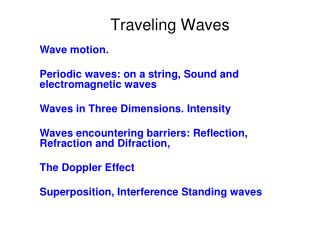 Waves - . do the wave!!. in class on board- w/demos wave vs particle mechancal vs non- mechancal longitudinal vs

Traveling waves cont. and 20.2 - . wave speed. a disturbance is created by a source. once created, the disturbance

Engineering &amp; Waves: Seismic Waves - . engineering waves overview. in this lesson, we will learn about: what are

Waves - . what is a wave?. a wave is a disturbance that travels through a medium from one location to another. a wave is

WAVES - . the electromagnetic spectrum. waves are a method that enrgy uses to travel from one location to another. waves