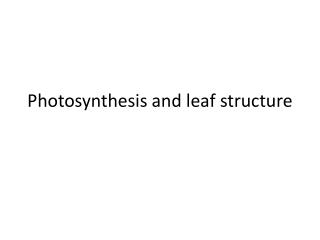 Plant - . you’ll leaf this knowing more!. form and function. a presentation of chapters 35 – 39 by clarence lewis,

Paper Chromatography of a Spinach Leaf Lab - . *record all of the info underined and in red in your notebook background

PHOTOSYNTHESIS - . the light reaction. atmospheric co 2 is “fixed” by plants and cyanobacteria. a light-driven

Leaf Anatomy &amp; Morphology - Bell ringer: why do you think that some leaves are broad and flat and others are