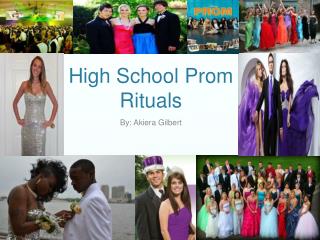 High School Prom Rituals. By: Akiera Gilbert. What is Prom?. As defined by Merriam Webster Dictionary Prom: A formal dance given by a high school or college class. Ethnographic Interview-Cultural Scene. How to Dress for High School Graduation - Tips for Girls - For you to achieve your goals in life, so you go to a new