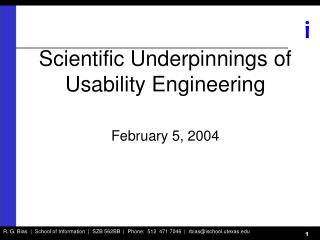 Scientific Underpinnings of Usability Engineering. February 5, 2004. Objectives. After this class you will be able to (it is my hope!): Describe some eye physiology Explain how the visual system works (somewhat) Identify visual cues to depth Explain some aspects of the psychology of reading

Usability and Utility of TopicLens - . a visualization system for the exploration of topic models. sunil gahlawat lu gan

Improving Website Usability - . what is usability?. a measure of the quality of interaction between a person and a

Usability - . when you design the userinterface to a computer system, you decide which screens the system will show, what

The Purpose is to explain how something works or why something happens - . mr. jeffery boggan. write in third person.