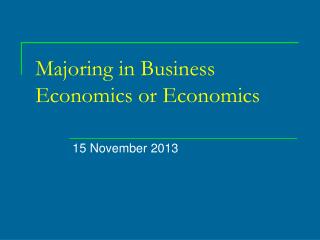 Majoring in Business Economics or Economics Majoring in Business Economics or Economics

Welcome to Principles of Microeconomics Summer 2013 - . name that economist. this guy’s important. this guy’s a

Why be an econ major (or minor)? - . economics major and minor. economics is the study of decision-making and incentives

MAJORING IN ECONOMICS AT YSU - . what do economists do?. rick kaglic. regional economist, federal reserve bank of

Welcome to Towson University’s College of Business and Economics - . focused on applied business learning. why choose

Department of Economics and Finance City University of Hong Kong - . presented by : coordinator of undergraduate

Chapter 1: Exploring the World of Business and Economics - . learning objectives. discuss what you must do to be

UP School of Economics “the school of choice” - . a freshman orientation by the se undergraduate committee 9 may