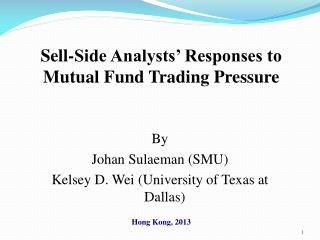 WHAT IS A MUTUAL FUND? - A mutual fund is a trust that pools the savings of a number of investors who share a common

Mutual Funds - . concept and characteristics. concept. what is a mutual fund? common pool of money joint or

The Morningstar Approach to Mutual Fund Analysis—Part I - . chapter 9. cycle of fear and

Liberty Mutual B2B - . lisa henry manager, liberty mutual b2b. the opinions expressed in this document are those of the

The Economics of Mutual Funds - . chapter 3. size and structure of the mutual fund