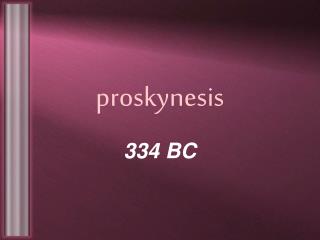 proskynesis. 334 BC. Proskynesis [Greek name for the ritual greeting in Oriental courts]. What does Proskynesis look like?. What is proskynesis?.

Sources for Alexander the Great - . to fully understand alexander we should have at least a basic knowledge of where the

AE80: Alexander the Great and the Alexander Tradition - . november 1, 2006 part vii: the development of the legendary

Achaemenid Persia - . the great king and the rise of the persian empire. near eastern powers before persia: successors to