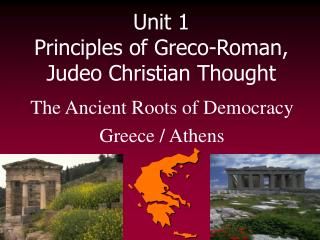 Unit 1 Principles of Greco-Roman, Judeo Christian Thought - 10.1.1 analyze the similarities and differences of

1. Judeo Christian Perspective and democracy - . every person is born with worth and dignity because they were created

GRECO-ROMAN IDEAS - . std 10.1.1 analyze the similarities and differences in judeo-christian and greco-roman views of

The Judeo-Christian Tradition - . (aristotle cont.) great chain of being. aristotle saw all life as organized as a ladder