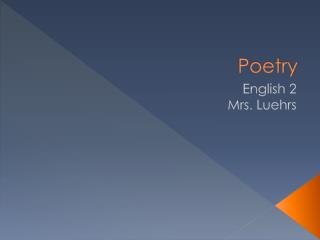 Poetry. English 2 Mrs. Luehrs. Day 1: Metaphor vs. Simile and Symbol. Metaphor A comparison between essentially unlike things without an explicitly comparative word such as like or as . An example is "My love is a red, red rose," Poetry Form: Found Poetry - . a found poem, a collage of

Poetry - . chapter 5. &quot;i think when you write a poem, one of the things you always hope to do is to surprise a

Poetry - . type of rhythmic, compressed language that uses figures of speech and imagery to appeal to the reader’s

POETRY - . what is poetry?????. poetry- a piece of writing used to convey images, feelings and emotions. poetry can

Poetry - . mrs. garcia 7 th grade reading. rhetorical device. (n.) a use of language that creates a literary effect (but

Poetry - . alliteration (consonance). most of the words begin with the same sound. . the flea and the fly a flea and a

Poetry - . mrs. tuttle. directions. you are going to analyze theme and tone in poetry. examine the slides on this