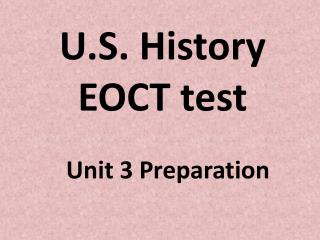 U.S. History EOCT test. Unit 3 Preparation. SSUSH 6. 6a. Explain the Northwest Ordinance’s importance in the westward migration of Americans, and on slavery , public education , and the addition of new states . Essential Questions.

Readiness standards comprise 65% of the U. S. History Test 9 (A) - . supporting standard (9) the student understands the

Louisiana History Reconstruction Era Test Chapter 11 - . us history. who became president of the united states after

EOCT Review - . domain iv - ecology. ecology. the study of the interactions between living things and their environment

American History TAKS Test Review Notes - . what happened in 1492? . christopher columbus sailed across to the

Practice Test US History Unit Six - . instructions for use: click the mouse and a question will appear, some with answers

SSUSH 21 - . president richard nixon recognized this country and used his policy of détente to have good relations so he