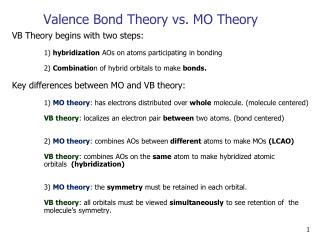 Valence Bond And Molecular Orbital Theories Overview - . parts of the material in today’s lecture have been borrowed

Lecture 15 Molecular Bonding Theories 1) Molecular Orbital Theory - . considers all electrons in the field of all atoms

CHAPTER 4: MOLECULAR ORBITAL THEORY - . it is clear that hybridized valence bond theory does not explain much of the

Molecular Orbital Theory - A Brief Review - . what is an atomic orbital?. heisenberg uncertainty principle states that it

Molecular orbital theory - . chapter 9. paramagnetism. an atom or molecule is paramagnetic if it contains ___________

Valence Bond Theory - . how do bonds form?. the valence bond model or atomic orbital model was developed by linus pauling