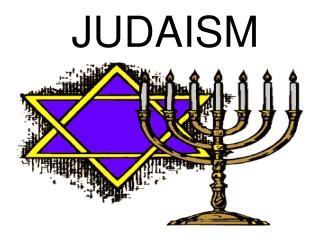 JUDAISM. -- MAP OF ISRAEL -- . How is Judaism related to Christianity?. Judaism predates Christianity – it is the foundation of Christianity, but is not a part of it Do not believe in “New Testament” Jesus was Jewish, as were his followers and the Apostles Contraception - . its significance within judaism, christianity, and islam natasha wallace, sctr 19: religions of the

Judaism and Islam - . judaism. -it is the first monotheistic religion (only worship one god) -main book/writings is the

Teachings of Judaism - . review of origins: origin of judaism review video judaism vs. other monotheistic religions.

Judaism - . -the hebrews were a minor player in history but were responsible for three great world religions – judaism

Judaism - . clint heinze. the beginning of judaism. circa 2000 bce near canaan (israel area). abraham is “founder”

Judaism - . jade and amélie. judaism. what do jewish people believe

History of the Hebrews &amp; Origins of Judaism - . see note guide. origins of the hebrews &amp; judaism. the

Judaism - . its origins, beliefs and practices. “ upon three things the world stands: on torah, on (divine) service,