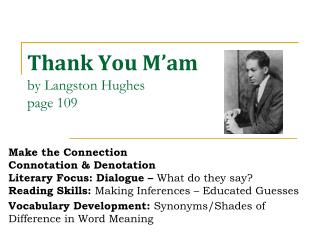 Author: Monica Hughes Genre: Science Fiction - . big question: how can a focus on the future help us imagine new

B. metaphor - 1. well, son, i'll tell you: life for me ain't been no crystal stair. it's had tacks in it, and splinters,

Project 2 - . creating a web site with links. objectives. describe linking terms and definitions add a link to another

Chapter Intro-page 140 - . what you ’ ll learn. you will relate an atom ’ s interactions with other atoms to its

Langston Hughes ’ “ Mother to Son ” - In your notebook, write a paragraph responding to this poem. if you ’ re

Second-Chance Algorithm - . basically, it’s a fifo algorithm when a page has been selected, we inspect its reference

First page - . an advanced course for graduates. refer to table 0.2-1 on page 4. we will study the topics by rows with