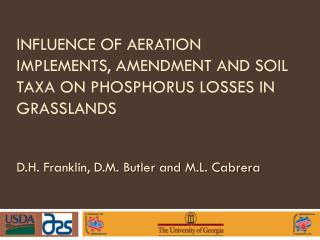 Influence of Aeration Implements, Amendment and Soil Taxa on Phosphorus losses in Grasslands

Influence of Aeration Implements, Amendment and Soil Taxa on Phosphorus losses in Grasslands

Soil Water - . at the end of class, student are expected to have ability to: discuss and describe soil-water-plant

Chapter 46 Ecosystems - . 46.1 too much of a good thing. phosphorus is an essential element for building atp,

More Gifts of the Glaciers - . soils. soil: foundation of terrestrial biomes. soil is a complex mixture of living and