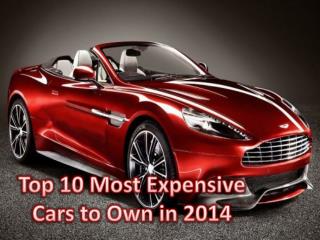 Cars are sometimes considered as a sign of wealth and luxury. When you see someone who drives a luxurious car, you will instantly guess that she is a very wealthy person. Most of the cars that are ranked as the most expensive cars in the world are rare and this is because their automakers manufacture them in small numbers to make sure that all the copies will be sold and that the customers will hurry to get their cars. Expensive cars are high in their prices because they have many features that make them different from other traditional cars that we drive. They make come to be faster, lighter in their weight and other features that make customers prefer to buy these cars than other cars which are available for anyone. To know which cars are the most expensive, we brought you the following top 10 most expensive cars to own in 2014. TOP 10 MOST EXPENSIVE CELEBRITY CARS - Prepared by: http://revol.com.sg/ surprising facts about their owners, the

Most Expensive Cars in the World - The world’s most expensive car list comprises of the top supercars of the season,

The Top 10 Most Expensive Gifts in History - It is never easy finding the perfect gift, but whether you are giving gift

Top 10 Most Expensive Homes in the World - If you want to live big, you have to pay big. some of the greatest, largest,

The Most Expensive Cars in the World - . listed by forbes in april 2006. list includes mass production cars only,

Top 10 Most fuel efficient cars in India - Get complete information on best mileage cars in india 2017. check out the