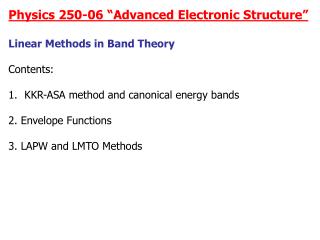 4. Electronic structure of molecules - . . 4.1 the schrödinger equation for molecules 4.2 the born-oppenheimer

Electronic Structure of Atoms - . in this chapter we will explore, the quantum theory and its importance in the study of

Density Functional Theory (DFT) - . dft is an alternative approach to the theory of electronic structure; electron

Advanced Statistics for Interventional Cardiologists - . what you will learn. introduction basics of multivariable

African School on Electronic Structure Methods and Applications - . theory and practice of pseudopotentials crucial in