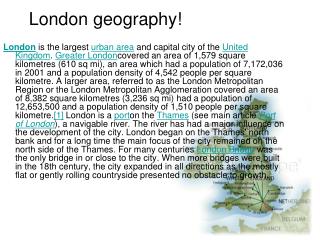 LONDON ZOO - . some facts about london zoo. in the heart of london, on the north side of regent's park, is london zoo.

What is Geography? - . ap human geography. geography is…. the scientific study of the location of people and activities

PENNSYLVANIA Geography - . important physical features. “if our history were a play, our geography would be the

Geography 2.3.1 - . the times, they are a changin’. today’s geography lesson. what we’ll cover the answers to the

London 2062: The Future of the London Economy - . jurgen essletzbichler department of geography ucl

LONDON - . london is a beautiful city . it has many turistic routes like london pass and the original london sightseeing

The Five Themes of Geography - . geography. geography – the study of the earth’s physical and cultural features it