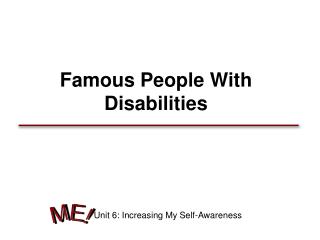 Famous People With Disabilities. Unit 6: Increasing My Self-Awareness. ME!. Does having a disability mean you can’t be successful?. Your disability only limits you if you let it! Let’s meet some successful people!. Dr. Stephen Hawking.

14 Famous Adults with Learning Disabilities - . can you match these well-known individuals with their learning

Famous People with Disabilities - Is it possible for people with disabilities to overcome prejudices in society, and to

Famous People With Dyslexia - . october is dyslexia awareness month. some might surprise you – or inspire

Successful People Thought to have Disabilities - . tom cruise. tom cruise is unable to read due to severe dyslexia. he

DISABLED PEOPLE - . the population of disabled people includes wheelchair users, blind people and deaf people who are an

Connecting people with disabilities: ITU-R - . itu-r activities addressing un convention on the rights of persons with

The history of Poland and famous Poles - . poland: past and present . poland is located in europe’s center. note: in