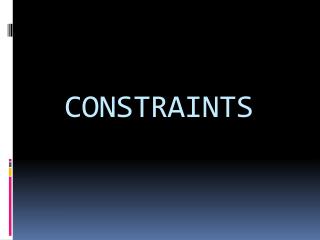 Constraints - . primary key constraint. it is derived from the entity uid or created as surrogate key. uniqueness is

Budget Constraints - . eco61 udayan roy fall 2008. prices, quantities, and expenditures. p x is the price of good x it is

Indexical Constraints - . a key issue in constraint (logic) programming system, is the implementation of the underlying

Integrity Constraints - . an important functionality of a dbms is to enable the specification of integrity constraints

Representing Constraints - . ~ adapted from walch education. key concepts. when an inequality has one or more variables