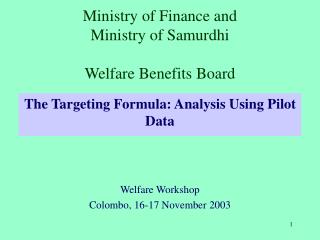 Ministry of Welfare - Pilot project for the creation of a nation-wide system to monitor neglected, ill-treated and

UKRAINE MINISTRY OF FINANCE - . workshop on the implementation and links between the system of national accounts 2008 and

MINISTRY OF FINANCE AND THE ECONOMY - . central tenders board division indrani rampersad, director of contracts - 14th